Will Debt Forgiveness in a Will Work?

A father lends money to his son and daughter-in-law to help them buy a house, secured by a mortgage on that house, and forgives the debt in his will. When the father dies, the son’s promissory note is the estate’s sole asset and without payment on it the estate cannot afford to pay creditors or the expenses of administration. Does the son have to pay off the promissory note so that the estate has funds to pay the father’s debts, or does the loan foregiveness clause operate to relieve the son from this obligation.

These are the basic facts of a Florida case, Lauritsen v. Wallace. The probate court held that the debt forgiveness was effective on the moment of death, but upon appeal, the Appeals Court reverses the decision—finding that the son has to pay enough to cover the estate’s debts as well as the costs of administration. 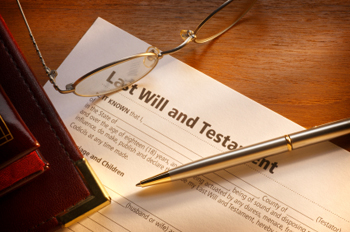 The Appeals Court reasons that if the father, rather than lending money to the son, had made a bequest of the same amount in his will, the son would only have received what was left after payment of the estate’s debts and costs. It would be unreasonable, the court finds, for the son to get a better result due to the debt forgiveness in the will. Further, the Florida probate statute lists many obligations that must be paid before bequest may be honored:

Several sections of the probate code support the conclusion that a devise cannot be elevated over administrative expenses and the rights of creditors. Section 731.201(10), Florida Statutes (2007), provides that “[a] devise is subject to charges for debts, expenses, and taxes[.]” Section 733.805(1) provides that “[f]unds or property designated by the will shall be used to pay debts, family allowance, exempt property, elective share charges, expenses of administration, and devises to the extent the funds or property is sufficient.” . . .The ruling by the lower court elevates the gift of forgiveness of an obligation to a superior status over the rights of legitimate creditors of the decedent, contrary to the priorities established in the Probate Code.

In other words, the father should not be able to escape his creditors through the device of debt forgiveness in the will. The court distinguishes this case from another in which the debt forgiveness was in the promissory note itself.  In that case, the debtor was relieved of the obligation to pay because the terms of the agreement precluded the estate from seeking repayment. It concludes:

Therefore, we hold that a decedent can release a debt owed to the decedent through a testamentary devise only to the extent that the decedent’s estate is solvent to pay all debts and administrative costs of the estate.

While not relevant to the legal finding, the case is quite sad. The decedent, William Wallace, executed the will 11 days before he killed his wife, one daughter and himself. The Wallace and Lauritsen in the case title are brother and sister and this decision culminates litigation among the surviving children after the tragic event.

Fortunately, few families will face this level of tragedy, but many may have insolvent estates or make bequests that cannot be fully satisfied by the estate assets. It’s important to consider what priority you would want in such case—forgive a debt or honor a bequest? Please note that this case reflects Florida law; the result could be different in other states.

PreviousHow Trustee Must Weigh Competing Interests of Father and Son
NextWhat’s With “Observation Status” in Hospitals?