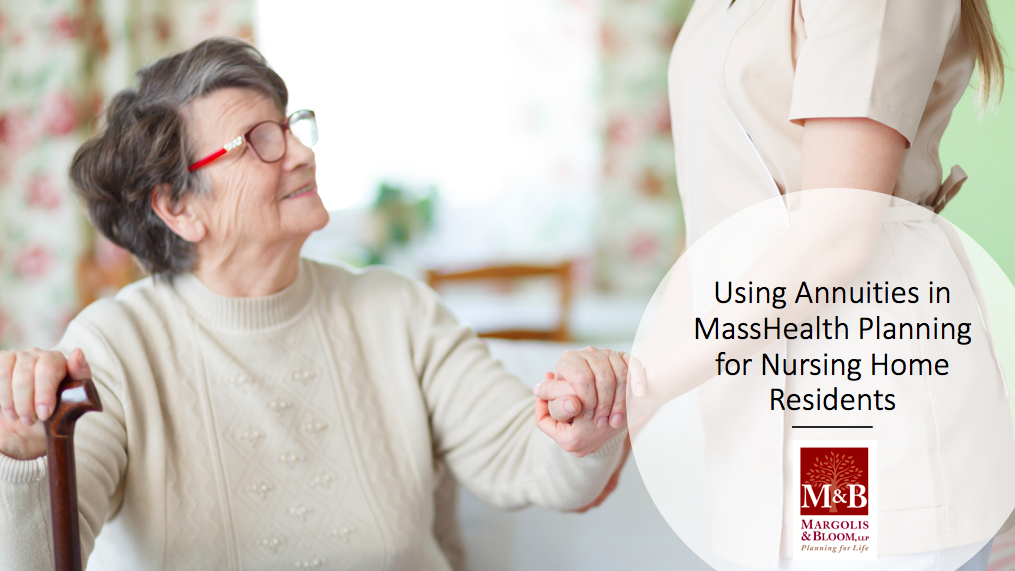 Here’s how it works:

Nursing home residents and their spouses may not give away assets to get down to the eligibility limit. However, they may purchase property of value. (More on this below.)

Finally, while the spouse’s assets are limited to $123,600 for the nursing home spouse to become eligible for MassHealth, after eligibility has been granted, MassHealth no longer monitors the healthy spouse’s assets. They may then be any amount.

An immediate annuity is a contract with an insurance under which the insurance company agrees to pay out an income stream to the purchaser, or “annuitant,” either for a period of time or for the annuitant’s life. For instance, an annuitant might pay the insurance company $300,000 in order to receive $5,200 a month for five years. This will total $312,000, just a 4% return over five years, or less than 1% per year. Immediate annuities provide very low investment returns and only make sense because they can save large amounts in nursing home fees.

Use in MassHealth Planning

Since there’s no limit on Mrs. Green’s asset level after Mr. Green has been approved for MassHealth, she can accumulate the annuity payments over five years and end up where she started with $425,000 in countable assets. (Though, to be sure, this is unlikely since she will be losing Mr. Green’s income that will be contributed to the nursing home, helping defray MassHealth’s costs to some extent.)

The immediate annuity must meet certain requirements in order to satisfy MassHealth, which they call being “actuarially sound.” First, the term of the annuity may not be longer than the annuitant’s life expectancy. If in the example above, Mrs. Green’s life expectancy is only three years and she purchases a five-year annuity, two fifths of the purchase price—$120,000—will be deemed a transfer of assets making Mr. Green ineligible for benefits for a period of time.

In our current low-interest rate environment, it is impossible to purchase an immediate annuity for a term shorter than five years that meets the second test for actuarial soundness. The second rule is that the annuity must pay out during its term at least as much as the purchase price. At the moment, annuities with terms shorter than five years don’t return the original investment. If, for instance, Mrs. Green purchased a three-year annuity for $300,000 paying out $8,000 a month, she would get back $288,000 over three years, which MassHealth would treat as a $12,000 gift to the issuing company, making Mr. Green ineligible for benefits for a period of time. (In fact, the period of time would only be a month or two, which might still make this a good plan.)

As with any legal strategy, the purchase of an immediate annuity works better in some situations than others. Here are a few of the potential pitfalls:

If you would like more information on this topic, read our legal guide, which you can download here, or view our webinar, Using Annuities is MassHealth Planning for Nursing Home Residents. Also, never embark on this tactic without first consulting with an elder law attorney so that you can understand all of the benefits and costs, the potential alternatives, and any changes in MassHealth policy.

Should You Prepare a MassHealth Application Yourself? – Massachusetts