We’ve reported on both the importance of family caregivers and the underfunding of paid caregivers, both because they’re underpaid and because it means we don’t have enough of them. Now comes a study from the Center for Retirement Research at Boston College that concludes that we don’t have enough family to go around either.

Part of a series about the need for long-term care, the Center finds that about a fifth of seniors will need no assistance during their lives, 38% a moderate level of care, and about a quarter a high level of care for three or more years.  Of this assistance, historically 64% has been provided by informal caregivers, mostly family members, at no cost, and the remaining 36% is paid for, mostly by Medic aid (22%).

The study looks at both financial resources and family assistance and determines that very few seniors have sufficient resources to cover severe care needs and more than a third do not have the means or family support to meet any care needs at all. This is especially difficult for unmarried women who have neither the finances or extended family of married couples. (The study looks at individuals who were married at age 65, so people who were divorced or widowed before that age are treated as single.)

With Fewer Marriages, It Will Get Even Worse

It seems to me that the picture is even gloomier than that painted by this study because it’s based on historical data and fewer Baby Boomers get married and stay married than was the case with prior generations. They also have fewer children. There will be even less family support for generations following the Baby Boomers.

According to the Pew Research Center, at age 38, 85% of the so-called Silent Generation lived with a family of their own (meaning a spouse or child, or both) as compared to 69% of Baby Boomers, 66% of Gen Xers and only 55% of Millennials. 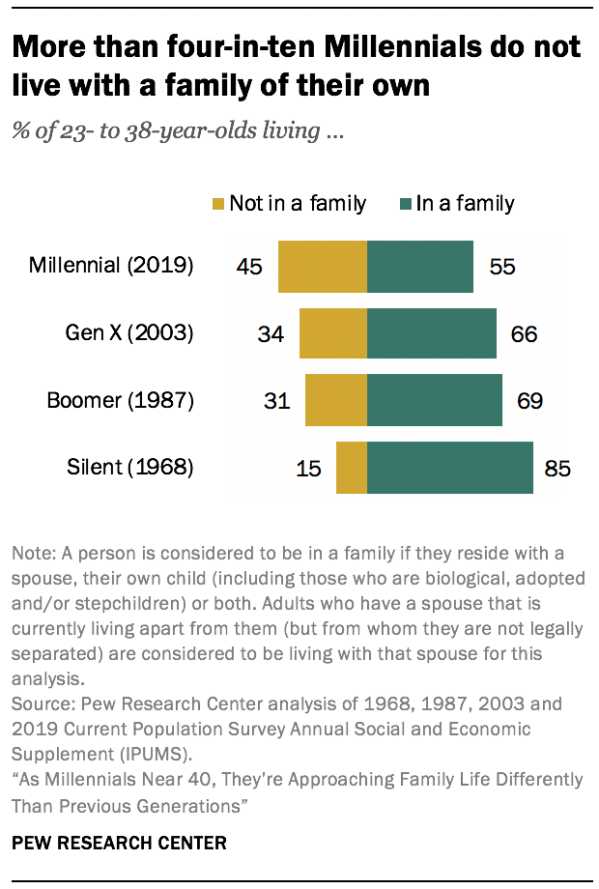 The result will be that there will be fewer family supports by generation. In addition, to the extent that married couples do better financially on average than unmarried individuals, future generations will also have less by way of financial resources to pay for their care needs.

In addition to fewer marriages by generation, Baby Boomers are more likely to have divorced than prior generations, the over 50 divorce rate doubling from 5% to 10% from 1990 to 2015, according to the Pew Research Center.

In addition to fewer adults being in families by each generation, those families had fewer children. In 1965, according to Statista.com, the average family had 2.44 children under 18. By 1985, the average had dropped to 1.85 children per family, with the number staying at this level more or less until 2015, after which it has begun to rise, reaching 1.93 children per family on average in both 2019 and 2020. Perhaps we are seeing the beginning of a small baby boomlet, at least among the smaller group of Millennials who are getting married (or having children without getting married).

(When I was growing up, the modal number for most families in my community seemed to be four, though my family brought down the average since I only have one brother. Today, the modal number seems to be two, which is the number of children most of my friends have, as do all the lawyers at Margolis & Bloom who have children.)

What This Means for the Future

We already knew that we have to get our act together in terms of long-term care. Our fractured system of providing care already leaves families scrambling to patch together something that works, at least more or less and at least until the parent faces a further decline. That’s assuming the senior needing care has a family. We already knew that in about 10 years the system will be further strained by the large number of Baby Boomers who will begin to need care.

What this study, along with a consideration of the lack of family support going forward, makes clear is that seniors will need more paid, non-family support than in the past. That’s a message I don’t believe I’ve heard before. The one factor that may ameliorate the picture painted by the Center for Retirement Research analysis to a small extent is the fact that more women are in the workforce than was the case for prior generations. The picture for unmarried women may be a bit better than they report.