During a recent bike trip in in Vietnam, I was struck by how youthful the country seems. The streets are full of young people on motor scooters. We were told that in a country of 95 million people, there are 35 million motor scooters (called Hondas just like we call tissues Kleenex). Riding the country’s web of rural lanes, we passed hundreds of schoolchildren who waved and called “Hello” to us. 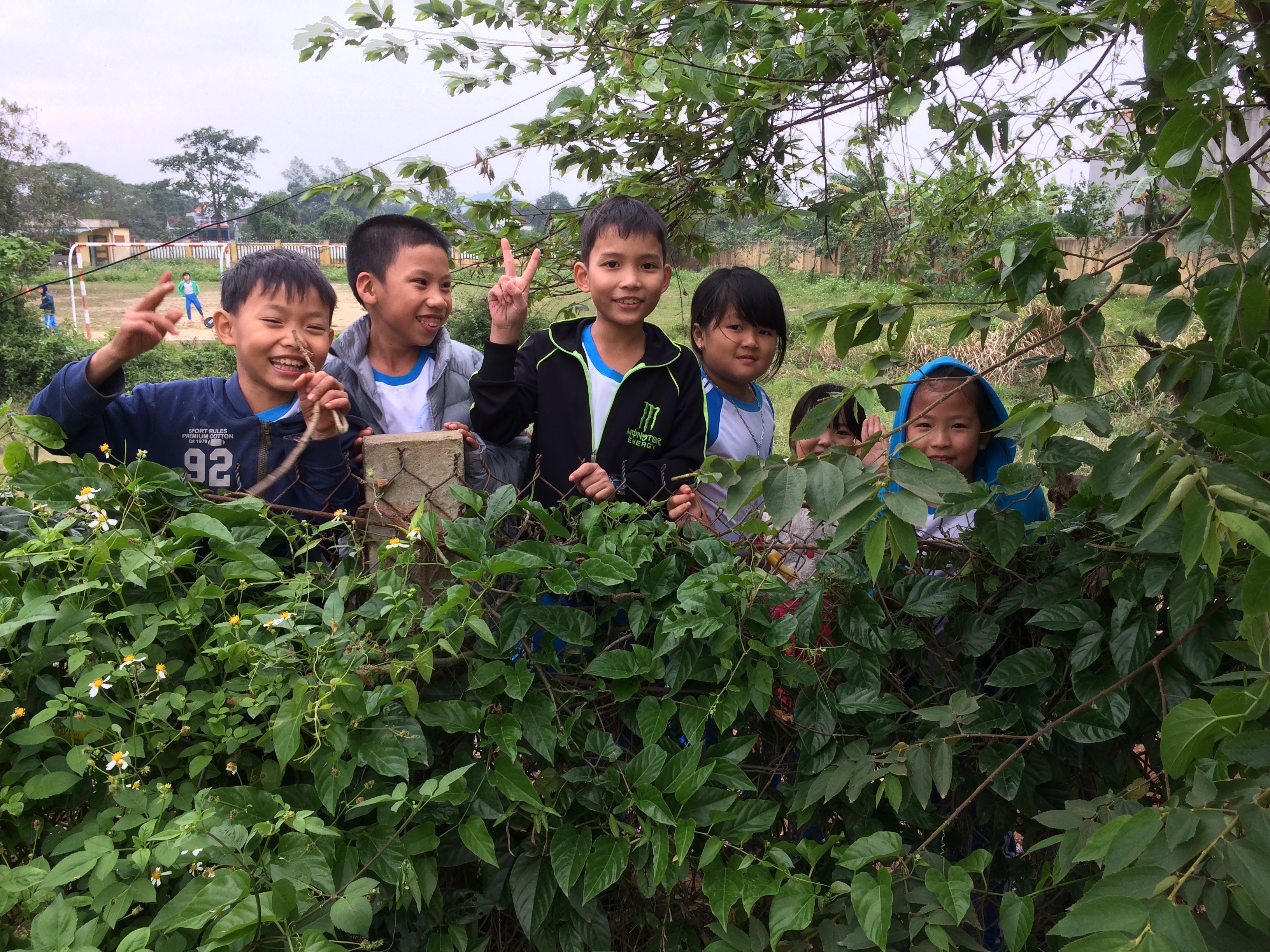 I was right in part and wrong in part. The median age of the Vietnam population is just 30.4, which compares to 37.8 in the United States. And there are very few Vietnamese aged 70 and above—3.2% as compared to 10.5% in the U.S.

But what’s surprising is that there was a dramatic drop in the birth rate about 20 years ago, just about when Vietnam and the U.S. normalized relations in 1995. Take a look at this population pyramid: 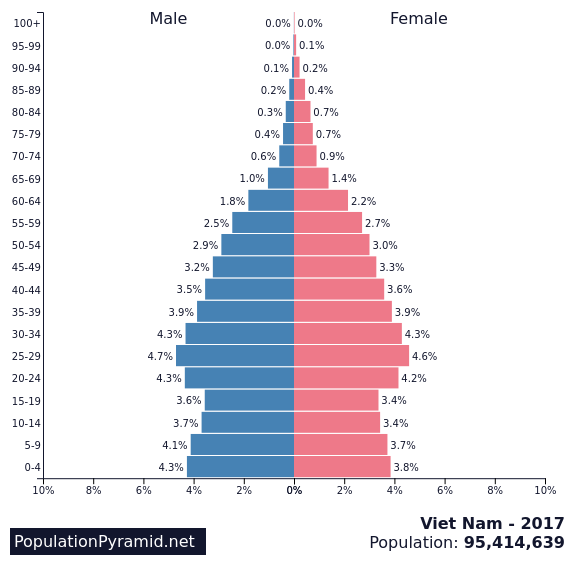 This may simply reflect what happens around the world when countries reach a certain level of development or something unique to Vietnam. And the numbers seem to be coming back with the number of those under 10 years old exceeding those between 10 and 19, no doubt reflecting the large number of Vietnamese of childbearing age.

The high proportion of working-age adults in Vietnam along with the opening up of the economy goes a long way towards explaining Vietnam’s sustained average growth in GDP of over 6.4% a year since 2000.

Japan Tells the Opposite Story

Contrast this with Japan, which has a median age of 46.1, tied with Germany as the highest worldwide. A very large part of its population—21.8%—are 70 or older. No wonder its average annual GDP growth has been just 0.6% since 2000, less than 10% of Vietnam’s growth rate. Of course, it’s harder for a developed economy than a developing one to grow at high rates since the developing economy has a lot of room to play catch up and the competitive advantage of lower wage scales.

In addition, as you can see from the following population pyramid, Japan also has a very low birthrate (as well as virtually no immigration). Japan’s population is expected to drop from almost 126 million today to 107 million in 2050. 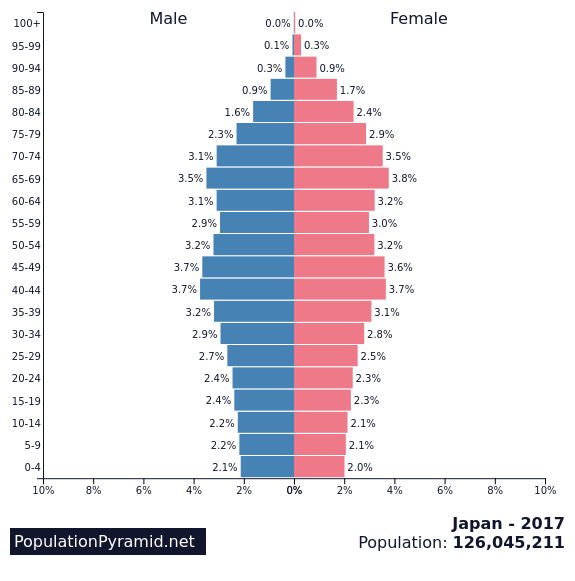 Europe is facing a lot of the same demographic challenges as Japan. On the plane ride home, I read an article in Le Figaro about Italy’s population drop of 100,000 people from 2016 to 2017 despite an influx of 184,000 immigrants. Italy’s birthrate has declined for 30 years, reaching its lowest level ever in 2017, falling from three children per woman on average in 1946 to 1.34 today.

What About the US?

The United States finds itself somewhere in between Vietnam and Japan (and Italy), with average annual GDP growth of about 3.0% since 2000 (even factoring in the great recession). This reflects a somewhat favorable demographic supporting growth while our mature economy, like Japan’s, makes growth more difficult. For the last two or three decades, Baby Boomers have been at their most productive economically. (What we’re leaving our children and grandchildren in terms of the environment, infrastructure, equity, debt, and future economic opportunities is a whole other question.) 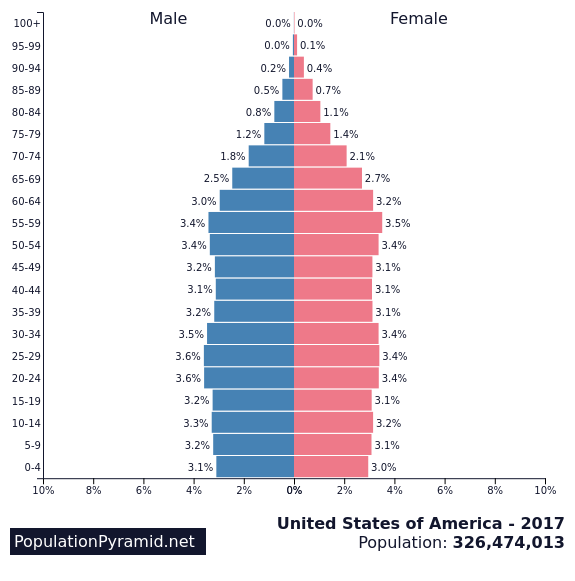 How to Avoid the Fate of Japan

While the U.S. is not projected to reach Japan’s current and future demographic imbalance, the trend is in a direction that is likely to create strong headwinds holding back future US economic development. Fortunately, there are solutions available, including:

Some of these policies will come to pass organically but I’m not optimistic about our leadership in Washington. At a time when we need to reduce health care spending, the politicians try to score political points about Obamacare. At a time of almost full employment, when we should be investing in our future, Congress passes a $1 trillion tax cut and a budget adding $300 billion to the federal deficit.

While Vietnam is still way behind the U.S. in terms of development and it has many challenges, you can’t miss the energy of its people nor the fact that it’s investing in its future. If demographics are destiny, it has a bright future. That of the U.S. is more in question, but is in our power to shape.

How Will We House an Aging Population?

PreviousBe Nice to Your Beneficiaries, or Don’t Be Their Trustee
NextWhy Most Married Nursing Home Residents Can Get MassHealth Coverage