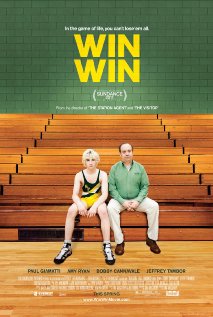 Win Win, the highly-acclaimed movie by director and screenwriter Thomas McCarthy stars Paul Giamatti playing a struggling elder law attorney in New Providence, New Jersey.  He takes on the guardianship of one of his clients because he needs the fee.  There’s nothing wrong with getting paid for the work you provide, but Giamatti’s character also lies to the judge, promising to keep the client at home rather than to move him to an assisted living facility, a promise he immediately breaks.

Fortunately, the lawyer is big-hearted as well as desperate and things work out in the end for him, his client, and the client’s grandson who ends up moving in with the lawyer and his family.

The story was co-written by McCarthy and Joseph Tiboni, an elder law attorney in New Providence, where both grew up.  Joe has assured me that the movie is not autobiographical.  His practice is thriving and he would never lie to a judge.

PreviousA Note to Personal Injury Attorneys: Don’t Neglect Settlement Planning
NextShould You Have to Spend Down for MassHealth Coverage?