Are You Aging Wisely? Advice From Those Walking the Path

A local psychologist (formerly a lawyer) and her 97-year-old father have recently published an inspiring volume, Aging Wisely . . . Wisdom of Our Elders, 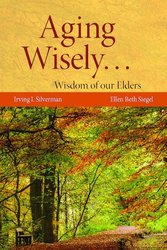 of more than 100 essays, and a few poems, by 73 contributors commenting on what they’ve learned, sometimes painfully, during their lives. Irving I. Silverman and Ellen Beth Siegel divide the selections into 19 parts, including Life Stories, Using Internal Strengths, Work and Retirement, The Meanings of Success, and Coping with Losses.

Here are a few brief extracts:

I was born with very poor vision — and my parents got me glasses. All of a sudden, the world that had existed as a blur became clearer.

As I have aged, my hearing has gone from bad to worse — and after some internal struggle, I agreed to try hearing aids. Amazing: I could interact so much better with those around me when I could hear what they were saying.

In my 90s, my balance has become precarious. At first, I rejected the idea of using a cane — I didn’t want to “look like an invalid” — but the cane did help me keep steady . . . and when the cane was not enough, after initial protests on my part, I progressed to a walker. Now I can get around wherever I need to go . . . and isn’t that the point, that getting around is more important than what mechanisms we use to do it?  — Irving I. Silverman

Having grandchildren is one of the primary rewards for having children in the first place. All those years when you thought you would never get through their infancies, childhood, adolescence, teens, and finally college, and all the mistakes you made and times you wished you could have a do-over: grandparenting is your chance for putting it right.

One of the nuttiest things I have done for my grandchildren is to fly across the country (in the winter) in order to pick up their new puppy at a breeder. Yes, I flew from Boston to the Midwest, drove to a breeder’s house, picked up an eight-week-old puppy, and flew with him to San Francisco. Crazy, yes, but the look on those kids’ faces when they saw their new dog was priceless, and I knew that I was forever part of that story. — Sherri L. Meade

One of Elsa’s housekeepers, who had taken a week off work when her mother died, made a point of visiting Elsa upon her return to check if there was anything she needed. . . . Elsa remembered why the housekeeper had been away. She invited her to sit down and tell her a little about her late mother. So she sat and they talked. And the housekeeper told me that for those few minutes, she felt her mother’s loving presence surrounding her. She had gone to Elsa’s room to provide care, and she left feeling comforted and nurtured.

I once praised Elsa for taking such a warm, genuine interest in her team of supporters, myself included. She explained that she could no longer get out into the world and mingle with interesting people in many settings, the way she had once done. But when people share their experiences with her, when they tell her about their concerns and their hopes and their joys, she feels connected to the world. So, although she seldom leaves her room, she feels enriched and her life expands.  — Rabbi Judi Ehrlich

PreviousHow Many Agents Do You Have?
NextWhy Don’t We Have Virtual Notarization Yet? (Actually, now we do)